WHERE THE ARK LANDED

FOLLOWING UP THE GREAT WORK OF THE LATE DAVID ALLEN DEAL 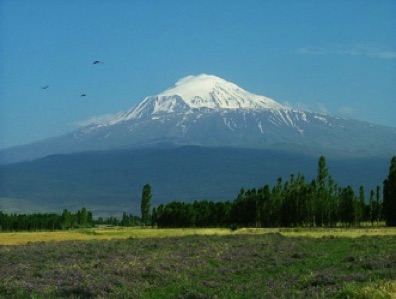 MESHA - "IN THE MOUNTAINS OF ARARAT"

Above left, we see Mount Ararat in modern-day Turkey, and get an idea how impractical it would have been to try land the ark of Noah on it. Above right, we see the mountain seventeen miles south of Mount Ararat where the ark actually landed (arrow), and the impression it left when it slid down the mountain about 100 years later.  At the top of the mountain, we see the escarpment cliffs which the Epic of Gilgamesh refers to as the “wall of heaven.”

Think about it: If you were Noah, would you land a huge craft full of animals, tools and supplies near the top of the highest, craggiest peak in the mountain chain? Why would you land your ship and everything you’ve brought from the pre-Flood world in an extremely precarious location? Wouldn’t you want to live in the ark until you made suitable habitations nearby? Wouldn’t you want to use the ark wood to build those habitations?

In Noah’s Ark—The Evidence: The Bible, The Flood, Gilgamesh & The Mother Goddess Origins, David Allen Deal presents a common-sense, convincing argument, based on fact after fact, that Noah’s ark landed on an 8,000-foot mountain seventeen miles south of Mount Ararat. I summarize here just a few of the surprising things David Deal has uncovered. With his permission, I use mostly phrases and sentences from his book.

The ark first landed on the mountain south of Ararat in a welcoming and accessible spot at an elevation of 7,400 feet (see arrow in illustration, opposite). The hull of the ark provided basic raw materials for the occupants of the first post-Flood city, Mesha-Naxuan. They stripped its planks and beams to build roofs, and used the melted down kapar or bi-tumen (tar) to seal the roofs from rain. They most likely used the wood for furnishings as well as fires. When the ark slid down hill after an earthquake and rains provided the impetus, perhaps after 100 years, the Mesha-Naxuan lumber yard moved a mile across the mountain, and 1,200 feet lower. Two ark impressions remain on the mountain: one where it landed, and the other where it descended to the lower elevation. Evidence on site indicates that the ark slid down the mountain, away from Mesha-Naxuan, after about 1,000 dwellings had been built there.

Mesha means “to be drawn out of water,” the name most likely given to it by Noah. Nax-xuan is a Greek interpretation for the Hebrew, noach tsywn, “Noah’s Zion,” or “Noah’s capital,” a name given to the city by later generations.

Sketch of the landing site on Mashu or Mesha Mountain as the survivors began to construct the first post-Flood city—Mesha. The ark was used to secure building materials such as wood for roofing and tar for sealing the roofs. Noah’s agricultural patch appears on the plateau. At present, this patch of ground harbors many types of plants that grow here profusely; but outside the perimeter of the small field, almost none of these plants appears. This patch shows up on aerial photos and cannot be easily explained except to say it was at one time a small field—perhaps for the grapes that Noah used to make his wine (Genesis 9:20).

Mesha is a variation of Moshe meaning “saved through water” as Moses (Moshe in Hebrew) was saved from the Nile. In the ancient Epic of Gilgamesh, Gilgamesh (Nimrod/Herakles) traveled to the mountains of Mashu to find Utnapishtim (Noah/Nereus), the man who had come through the Flood. Gilgamesh (Gl-Gm-Mesh) means “the man who revealed Mesha.” Genesis 10:21 refers to Noah’s son, Shem, as the “forefather of all the sons of Eber.” They were said to dwell “toward Sephar, a mountain of the East,” having come “from Mesha” (Genesis 10:30). The traditional Kurdish names for the mountain today are Masher Dag and Mashur Dag meaning respectfully, doomsday mountain and resurrection mountain.

In Shemitic (from Noah’s son, Shem), the place where Noah dwelt was also called Dilmun which means “the abode of the dangling (dried-up),” a fitting epithet for those left high and dry on the mountain after the world-wide Flood. Both names, Mesha and Dilmun, attest to Noah’s salvation from the Flood at this location. The Epic of Gilgamesh refers to the “wall of heaven” on Mount Mashu. You can see that wall, in the form of escarpment cliffs, in Dave Deal’s photo and in his drawing on the previous page.

Mesha-Naxuan was the very first city of our post-Flood civilization, built by Noah and his sons and their sons, from materials scavenged from the ark, long lost to the world but mentioned in many historical accounts.

In a footnote in Antiquities of the Jews by Flavius Josephus, translator William Whiston says that Noah’s landing and dwelling spot was called “Naxuan, the place of the first descent.” Here he quoted Armenian historian, Moses of Chronensis. This phrase “place of first descent,” implies a second descent, and that is exactly what the evidence on the mountain itself is telling us. The city of Mesha-Naxuan was the first “city” built by the Flood survivors and their descendants. Then from an earthquake and rain, the ark slid down 1,200 feet to its second and final resting place, leaving what is now a one-acre elliptical 538-foot-long ship’s hull impression at 6,200 feet.

Most or all of Noah’s offspring abandoned Mesha-Naxuan and built a new settlement where the ark came to rest. This second town built after the Flood was originally called Seron because of the Tsar or sharp out-cropping that penetrated and arrested the downhill slide of the ark hull remains. The “sar” part of the name remained in the later place names: Ni-sar and Na-sar. The Babylonians referred to the town as Nisir.

While mountain adventurers still climb Ararat, David Deal and a small unconnected group of other explorers began to realize the implications of this site at Mashur Dag, having seen the evidence for what it is. The ark mold impression is compelling as a stand-alone feature. The remnants of many ancient habitations discovered by Deal in 1996-1997 at the upper landing site (Mesha-Naxuan) and the “wall of heaven” written of in the Epic of Gilgamesh convincingly add to the evidence. Furthermore, the connected meanings of the various place-names on the mountain provide us with a unifying clarity. As the entire mountain location is now becoming known and understood, it is impossible to conceive of the ark landing anywhere else, especially on a massive volcano.

Dave Deal’s discovery relates directly to the depictions of Genesis characters in ancient art. In the early post-Flood world, the ancients revered Naamah (called Nammu in Sumer), the last woman mentioned in the line of Cain (Genesis 4:22), who came through the Flood as Ham’s wife, and who then instigated the abandonment of God and the return to the exaltation of the serpent’s “enlightenment.” The ancient artists deified Naamah/Nammu and identified her with the mountain upon which she landed in the ark. In these ancient images, she wears a mountain hat and her special dress is flounced and tiered representing sections of the escarpment on the mountain. Naamah’s image to the right holds the staff of the two-headed serpent symbolizing the serpent’s rule before the Flood, and now, because of her Cainite dedication, the serpent’s rule resumed in the post-Flood world. Please see INTRODUCTION for information on Naamah’s ultimate glorification as Athena in the Greek world.

An illogical and unwarranted assumption prevails today relating to the landing spot of Noah’s ark. People—highly educated people—are sure that Noah’s ark landed on the remote and inaccessible heights of Mount Ararat, a 17,000-foot volcanic mountain in modern-day Turkey. The Book of Genesis does not say that the ark landed on Mount Ararat, but rather “on the mountains of Ararat” (Genesis 8:4), meaning on a mountain somewhere within the range.